For six minutes, Serie A 2017-2018 virtually ended in the hands of Juventus last Wednesday, as Massimiliano Allegri’s band were all set to increase their gap versus pursuing Napoli to nine points. But then, the unexpected happened in Round 33, with the Bianconeri conceding a shocking equaliser at Crotone, and Maurizio Sarri’s Azzurri managing to come from behind with Udinese.

The last mid-week round of this season, featuring nine matches out of ten played contemporarily on Wednesday light – just like in those old gold calcio days – offered some thrilling experiences to football lovers, who saw the battle for Scudetto closing and then suddenly reopening. One could not ask for any better preview for the upcoming partitissima Juventus-Napoli, to be played tomorrow at the Allianz Stadium in Turin.

The Neapolitans, which are undefeated in their last 29 away matches in Serie A, will have the chance to close the distance to one point. On the other hand, should Juve prevail, they could legitimately start stitching a new Scudetto patch on their chests already.

The menu of Round 33 was enriched by an epic head-to-head between Fiorentina and Lazio, with the Biancocelesti ultimately prevailing 4-3, whereas losses by Cagliari and Udinese made the relegation battle even more interesting.

Neither the Isolani nor the Friulani can consider themselves safe already, and will need to compete until the end with SPAL, Crotone, and Chievo to avoid winning the last ticket for a yearly trip to Serie B. Hopes are getting dimmer for Verona, even if a four-point gap versus fourth-to-last SPAL makes the venture still possible.

The law of numbers still doesn’t condemn Benevento, which benefited from the draws by SPAL and Crotone, but the mathematical certification of the Sanniti’s relegation will likely come this weekend.

The mid-week round also left the two Milano’s Navigli river sides with opposite moods: Inter captured a triumphal 4-0 win over Cagliari, remaining close to Lazio and Roma for a Champions League spot battle – all three of them being within a one-point margin. Gennaro Gattuso’s Rossoneri, on the other hand, scored their fourth draw in a row, basically saying goodbye to their top European competitions dreams for the next season.

Benevento-Atalanta 0-3
Daniele De Zerbi’s Benevento lasted for 20 minutes, before Atalanta could take control of the game and collect an easy win. Remo Freuler scored the first goal for the Orobici, then Musa Barrow stole the spotlight with his first marking in Serie A. The 19-year-old Gambian striker has been one of the most interesting prospects in these recent campionato weeks. Marten De Roon took the luxury of missing a penalty kick, before Alejandro Gomez could set the score on 0-3. Gian Piero Gasperini’s Atalanta promptly came back into the race for a European slot. Benevento missed the certification of an early relegation only thanks to their direct rivals all failing to win.

Crotone-Juventus 1-1
One could say that scoring against Juventus is so difficult, that you can’t do that unless you recur to some spectacular overhead. And so, just like Cristiano Ronaldo a few weeks ago, the Bianconeri fell victim to another impressive bicycle kick, this time by Crotone’s Nigerian striker Simeon “Simy” Nwankwo. Walter Zenga’s Squali thus punished a Juventus side who seemed to underestimate once again their provinciali rivals – just like it happened with SPAL and Benevento recently. Alex Sandro’s lead, served by Douglas Costa, deluded Massimiliano Allegri – who for some minutes found himself leading over Napoli by nine points – but the end-match celebrations were all for Ezio Scida Stadium’s home supporters, whose dream of reaching a second consecutive safety continue.

Fiorentina-Lazio 3-4
Seven goals, three red cards, and a rain of emotions at Artemio Franchi Stadium, where Simone Inzaghi’s Biancocelesti tamed La Viola and their former Lazio coach Stefano Pioli, despite a hat trick by Jordan Veretout. Just 15 minutes into the game, both teams were already playing with one man less, due to the expulsions of Fiorentina’s goalie Marco Sportiello (handball outside of his box) and Lazio’s striker Alessandro Murgia (last man foul). Veretout found his first goal with a free kick right after Murgia’s expulsion, then made it two in the 28th minute from the penalty spot, after Luiz Felipe had sent Cristiano Biraghi down in the box. Lazio didn’t lose their temper, despite suffering a new expulsion, with coach Inzaghi being sent off for protesting at a disallowed penalty. Luis Alberto reduced the gap for the Eagles with a perfect free kick, and before the break Martin Caceres equalised – with some help from Fiorentina’s substitute goalie Bartlomiej Dragowski. In the second half, Veretout earned the right to take the ball home with a surgical shot to give Fiorentina the lead again. The Biancocelesti were furious at a new penalty disallowed by referee Antonio Damato due to Ciro Immobile being in offside, but still found the strength to move to 3-3 with a wonderful long-range shot by Felipe Anderson. Then, just two minutes later, Luis Alberto found his second goal of the day, anticipating German Pezzella on a cross by Adam Marusic. Three points for Lazio, and first loss in six games for Fiorentina. But, what a game!

Inter-Cagliari 4-0
Inter closed their non-winning streak to three games, hammering hard an impalpable Cagliari, and avoided losing any ground in their distance battle against the Romane (Lazio and Roma) for a Champions League slot. The Nerazzurri took an early lead after just three minutes, when nobody dared to intervene on an insidious free kick by Joao Cancelo, and the ball bounced into Alessio Cragno’s net. Mauro Icardi scored the second goal with a timely right-foot shot, well served by Rafinha. Goals by Ivan Perisic and Marcelo Brozovic continued the trampling of a Cagliari that never gave the impression of being able to pose any threat to Luciano Spalletti’s band. Four points over third-to-last Crotone are not enough as a margin, and Diego Lopez and his boys will need to show much more of what seen last Tuesday, if they don’t want to risk an unexpected relegation.

Napoli-Udinese 4-2
The fate of Napoli’s season changed in the space of six minutes in the second half, with the Azzurri down 1-2 against Udinese, and news about Juventus leading 1-0 in Crotone spreading. In that very moment, Napoli were plummeting at -9 points from the capolista and, given the not too brilliant moment of Maurizio Sarri’s squad, few could expect a comeback from Lorenzo Insigne and his teammates. Still, coach Sarri’s decision to switch to a 4-2-3-1 module for the first time in the season, gave the Partenopei a new spark and led them to overturn a seemingly lost match. Udinese had put their heads ahead with Jakub Jankto, but Insigne had needed only one minute to equalise. In the second half, a cross by Francesco Zampano served young Svante Ingelsson for him to score his first Serie A goal and put the San Paolo Stadium in despair. But Napoli found some unhoped-for strengths, and first a header by Raul Albiol, and then a precise shot by Arkadiusz Milik brought them ahead, before a new header by Lorenzo Tonelli set the score on 4-2. The Partenopei are still alive, whereas for Massimo Oddo’s Udinese, this was the tenth loss in a row! 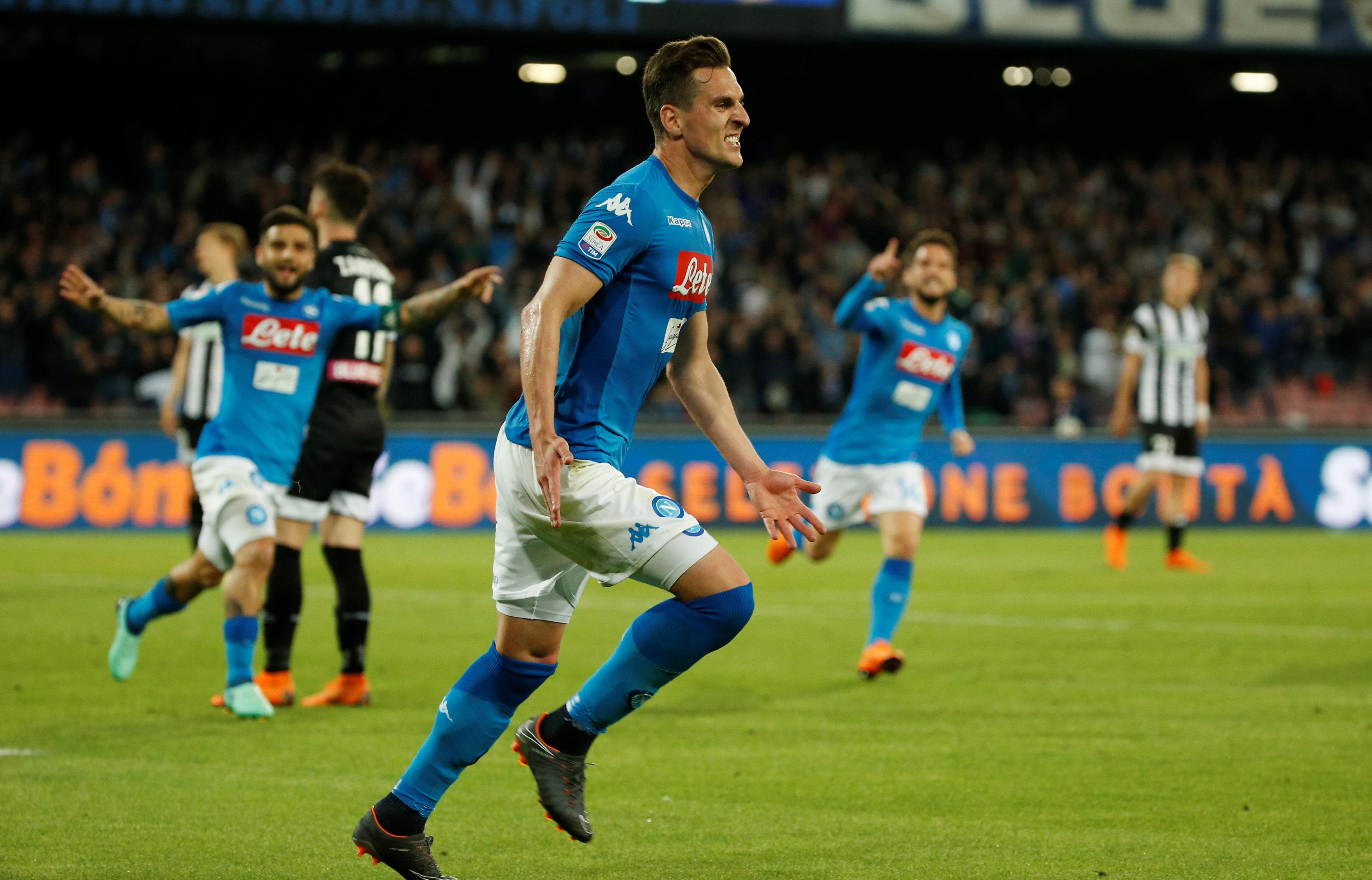 Roma-Genoa 2-1
The Giallorossi came back to win after three games in which they had cashed only two points. A tap in by Cengiz Under on a free kick by Aleksander Kolarov gave Roma the lead, which was then doubled by an own goal by Ervin Zukanovic. Gianluca Lapadula reduced the gap for Genoa, anticipating an exit by Alisson. It ended with both teams pushing for more, but the score didn’t change anymore. Roma could maintain their third spot, whereas nothing changed for the already-safe Grifoni.

Sampdoria-Bologna 1-0
Sampdoria needed some points to keep chasing a Europa League spot, but had won only one of their last six games. Bologna are comfortably safe already, and limited themselves to defend with order, only to try some sporadic counterattacks. It looked like a perfect mix for a goalless draw, but with just a few seconds to go, substitute forward Duvan Zapata found the lucky shot to give Marco Giampaolo’s Blucerchiati a key win to keep their European dreams alive.

SPAL-Chievo 0-0
The match put at stake three fundamental points for both teams’ chances to remain in Serie A, but SPAL and Chievo appeared more afraid to risk, than willing to hurt each other. A nil-nil draw was the only possible conclusion, with the Ferraresi prolonging their draw streak to six games. Both clubs are still bogged down in the relegation zone.

Torino-Milan 1-1
Fourth tie in a row for Milan, which threw their residual hopes of making it to Champions League away, and will now need to defend their Europa League spot from the assaults from Atalanta, Sampdoria, and Fiorentina. The match at the Grande Torino Stadium started well for the Rossoneri, with Giacomo Bonaventura finding his 6th seasonal goal, but ended with them breathing a sigh of relief as Andrea Belotti hit the woodwork from the penalty kick spot to miss the 2-1 for his Torino. The Granata had equalised with a header by defender Lorenzo De Silvestri, who anticipated Ignazio Abate and Gianluigi Donnarumma. Milan’s keeper however redeemed himself in the 89th minute, deflecting a tricky shot by Adem Ljajic.

Verona-Sassuolo 0-1
Sassuolo snatched three points out of Verona to give themselves a strong push out of the relegation zone. The Scaligeri, strongly contested by their own supporters, were punished by a mistake of their goalkeeper Nicolas Andrade, who failed to control an easy ball and delivered it on the feet of an incredulous Mauricio Lemos. Sassuolo’s center back had only to push it into the Gialloblu’s net to reap the benefits of a dominance that had produced at least three clear scoring chances earlier – all of them neutralized (oh, the irony) by Nicolas with some great saves.

Italian Football News and Stories. Cooked by Italians, Served to the World.

The Cult of Calcio@cultofcalcio·
17h

Introducing our new column - a series of portraits of Italian players who spent part of their career "on Her Majesty's service."

Our journey starts with @Iukephelps taking a look at Benny Carbone's unfulfilling experiences in the Premier League!

The Cult of Calcio@cultofcalcio·
1 Apr

The "Milan of The Dutchies," the "Inter of The Germans"...Serie A clubs were home to several communities of compatriot players during its '80s-'90s golden days.

The Cult of Calcio@cultofcalcio·
30 Mar

Germany had been watching from the sidelines the first three editions of the UEFA Euro, but made short work of all their opponents to collect a dream debut in 1972!

The 4th episode of or History of the European Championship is on!

The Cult of Calcio@cultofcalcio·
20 Nov

Screw the Catenaccio! When #Italy Go into Full Attack Mode

The Cult of Calcio@cultofcalcio·
19 Nov